Buffalo Bones Revived – At one time vast herds of bison roamed over the Mouse River and Des Lacs valleys. Sometimes when the herds would go down to the river to drink, the older, weaker animals became mired in the mud and remained there to die. The bones of the animals could be found in the water and often in the dry bed of a river or lake after the water receded. Picking buffalo bones off the prairie in the late 1800’s was a way for many homesteaders to provide themselves and families with many of the staples needed for living, things such as flout, coffee, bacon and other necessities. The bone industry was at its peak in the late 1800’s when thousands upon thousands of buffalo skeletons were hauled to Minot off the prairies and piled up next to the railroad tracks. At one time so many buffalo bones were piled next to the tracks in Minot, the railroad put in a spur line to get the rail cars closer to the pile for loading. The bones were then shipped to St Louis or Chicago. In 1937, buffalo bones were still worth money, about $10.00 a ton in Minot. The bones were used for various industrial purposes. In the early days the bones were used for fertilizer and in the process for refining sugar. Getting buffalo bones in 1937 was a bit more difficult. The more modern day bone pickers almost had to become miners. Sometimes it took a pick and a shovel to retrieve the bones. 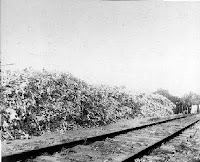 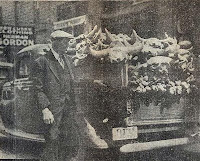 Posted by minotmemories at 5:05 AM