Many of us will remember the days gone by when girls “ratted” their hair. This began in the early 60’s and was popular for a number of years…. The Newspaper devoted about ½ page to the subject in February, 1963. The girls (only 3 at the time) felt it gave them extra body and the illusion of height (up to 3 or 4 inches). The “rat” their hair properly would take about 60 to 90 minutes. To return their hair to normal, another 30 plus minutes. I the article, most of the boys interviewed were not in favor of the style. Most agreed that they did not like it… some went so far as saying it made the girls look like monsters and one claimed the girls look like grizzly bears with their hackles raised.
Posted by minotmemories at 7:12 AM 4 comments:

Re-Grand Opening – February 15, 1963 …. North Hill Bowl Completed its remodeling project and was celebrating its new facility. 8 more lanes were added bring the total to 32 …. A meeting / banquet room and a nursery were also added and a Billiard Room ( as I recall it was on the south end of the building)…. During the re-grand opening celebration, free bowling instructions was provided by AMF experts…. Door prizes  were given away every hour …. Owners / proprietors were Morris and Betty Anderson. Early pictures below of North Hill Bowl when they had a drive in restaurant

Posted by minotmemories at 5:11 AM 4 comments:

Some of the businesses and proprietors on the “Magic Mile” included Ardell Horob – Chateau Lanes – (Bowling alley where Perkins and Days Inn are now) ….. Oscar Swenson – Swenson’s Furniture (Computech) ….. Larry Ostdahl – Sebby’s House of Tile (corner of 19th and South Broadway (new Dentist Office)) ….. Past Eating Establishments – The Shirley Room Cafeteria – Lower level of the Minot Federal Building…… Chief’s Chicken ‘n Beef & Fish – Located at 1701 South Broadway – Hours were 9am to 10 pm --- eat in or take out – Jake’s Spice & Spirit --- 1919 South Broadway (now the home of the Marketplace Dollar Store) ----
Posted by minotmemories at 5:04 AM 4 comments:

Posted by minotmemories at 4:43 AM 4 comments:

Posted by minotmemories at 4:54 AM 4 comments: 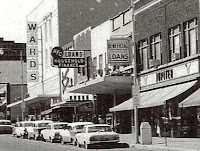 Posted by minotmemories at 5:05 AM 12 comments: