Einar Muus – (from a Minot Daily article on Nov 20, 1936).  on May 15, 1897, Einar Muus arrived from Norway with his older brother Jacob.  Is first job was the Great Northern Railroad. In 1899, Einar went to work for Muus and Welo, a mercantile store in Velva that his brother John had part ownership in. 1900 was Einar’s “covered wagon year.” He used the wagon as a portable store, taking general merchandise to the farmers. At 19 he got a job as bookkeeper with T. P. Kulaas in the Kulaas Lumber company. The Minot School Board needed a secretay, so Kulaas, without consulting him, recommended Einar. He got the job. The Kulaas Lumber Company was on Central Avenue, in the middle of the block behind what is now the Taube Museum. Kalaas remained in the lumber business until 1904 when they sold out to the Bovey – Shute Lumber Company. In the spring of 1905, the Great Northern Lumber Company was formed with Einar Muus as the manager, in the same location on Central Avenue. In 1917 the entire stock of Bovey-Shute was purchased at 201 Central Avenue. The Great Northern Lumber Company continued until 1930. After the death of O.P. Nustad, the name changed to Muus Lumber with Einar as the sole owner. Pictured below is Einar Muus. The other picture shows the Great Northern Lumber Co. in the background. The horseman on the left is Jacob Muus. The stable would be about where the Clarence Parker parking lot is today. 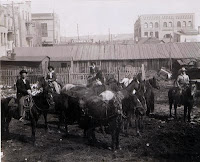