Ellison’s planned a three story department store with another two floors of office space on top. The first three floors were built but not floor 4 and 5 as George Vaulker started building his office building on the northwest corner of 1st Street and 1st Avenue Southeast.  Thinking there would be a surplus of office space, the Ellison Building remained at only three floors. The restaurant in the Ellison Building was 0n the second floor. The Vaulker office building  was never completed. The bottom two floors were all that was finished. The top floors were open with just the supports showing. The building was referred to as “The Sparrow Hotel” for many years as the birds were the only tenants. Twenty years later Clarence Parker bought the unfinished building and converted it to the Clarence Parker Hotel. In 1953 President Eisenhower  stayed in Minot while visiting the Garrison Dam. While in town, he rented a suite rooms at the Clarence Parker Hotel. He also had Charlie Damakis as his personal chef during his stay in Minot. By the way, it seems that President Eisenhower was a bit disappointed when he saw the Garrison Dam. Apparently he was expecting a dam similar to the Boulder Dam. 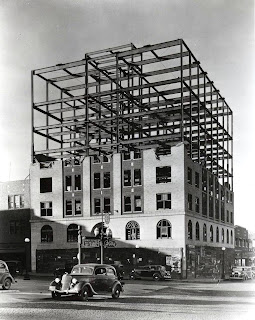 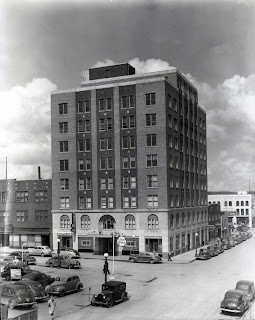 Posted by minotmemories at 4:53 AM