One of the residents on the top floor was Joe Welk.  He was a cousin to  Lawrence Welk. In the late 20’s and early 30’s. Lawrence Welk was not the celebrity he became later on. He would stay with Joe while his band was performing in the Minot area and many times at the Pavilion in Riverside Park, now Roosevelt Park. One of the early tenants lived in one of the basement apartments. She knew him only as Larry, cousin to Joe. She told my wife that Larry was always trying to get people to his dances, but she said “he wasn’t that good” so they usually did not go. Years later she realized that the Larry she knew, was actually Lawrence Welk. Joe Welk kicked Larry out as he would run up Joe’s phone bill trying to book his band in the northern part of the state, but never repaid Joe for the long distance calls. This was verified by Lloyd Heusers, a former teacher at Minot High and long time member of the Minot Park Board. As a child he lived in the house just west of our house. His father was a cab driver and a good friend of Lawrence Welk
Pictured is the house as it is today 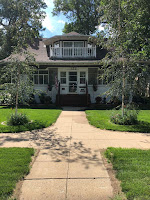 Posted by minotmemories at 4:17 AM