The first big outdoor pageant was performed on the evenings of July 21 and 22, 1922. The performances were part of the “Fortieth Anniversary Celebration” of Northwestern North Dakota. The very first white settlers located in 1882 near what is now Minot. Each day there was a “Parade of Progress” at 2pm and the pageant at 8 pm. There were also baseball games, cowboy roping, riding exhibitions and band performances. The pageant was referred to as the “Historical Pageant”, “Pageant of Progress” or the Pageant of Minot. The location was a coulee four blocks south of the Post Office. Attendees sat on the hillsides and the stage was at the foot of the slope to the west. The Post Office in 1922 was what is now known as the Federal Building on First Street SW. Four blocks south would put the location close to the site of the present Post Office. The stage in the general area of the Scandinavian Heritage Park 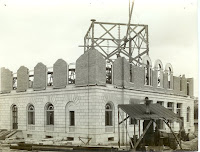 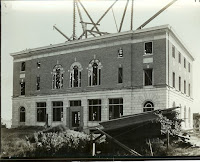