Beer & Wine Wholesale Business  -- Bill Langer was instrumental in helping Lou Stearns in getting his license to start his wholesale business, Minot Beverage Company. According to one of his past office managers, part of the deal was that Langor received a payment of 5 cents for every bottle of beer or wine distributed. However the checks were always sent to a judge in New York rather than to Bill Langer. One would suppose that the money eventually reached him.

The Soft Drink Business – The soft drink business started in the Stearns Motors building as part of Minot Beverage Company. My understanding is that at one time there was a bottling operation in the basement of Stearns Motors. This was eventually moved to South Broadway and became Northern Bottling Company, which is still in business today 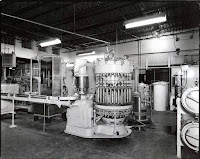 Minot Beverage delivery truck
Posted by minotmemories at 5:06 AM