the Nash Finch Co. started in 1885 as a small confectionary store in Devils Lake by Fred Nash. Fred urged his brothers, Willis and Edgar to join him. This began the Nash Brothers Wholesale Fruit House in 1889. Soon they hired Harry B. Finch and the Nash Finch co. was established. In 1904, Nash Finch purchased Minot Grocery Co. and expanded into Minot as a wholesale house on Central Avenue and First Street NE. In 1953, Nash Finch consolidated with Ward Mercantile and moved to a location on US Highway 2 & 52. Nash Finch is now located on West Burdick Expressway. 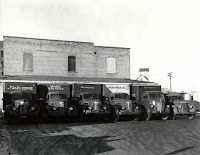