New Minot Radio KCJB 910 AM and KCJB-TV  - KCJB arrived on the scene with several new personalities and shows. Two of these were Dean Thurrow, and Cis Hadley. Cis went out to neighboring towns grocery stores for remote broadcasts. One of these was from the HiLo Groceries at Van Hook. Of course the show was called "Hello from HiLo" .  Many remember being at the remote shows and also listening to the shows to see if your neighbors might be interviewed on the radio.
Another Minot Memory would be when KCJB TV went “On Air”. The first year they were at the state fair they did closed circuit from several locations on the fair grounds. The broadcasts were not very  clear, having a lot of “snow” on the scene. This led to the famous statement of one fair attendee watching the dairy cattle judging in a different building. His statement to his wife was “lets go over to the dairy barn,  its hot here but looks like it’s snowing over there"  “Live”  TV at its best.... KCJB-TV is now KXMC-TV. 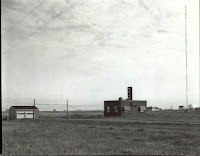