Beer & Wine Wholesale Business  -- Bill Langer, former Governor of North Dakota,  was instrumental in helping Lou Stearns in getting his license to start his wholesale business, Minot Beverage Company. According to one of his past office managers, part of the deal was that Langor received a payment of 5 cents for every bottle of beer or wine distributed. However the checks were always sent to a judge in New York rather than to Bill Langer. One would suppose that the money eventually reached him.

Stearn’s  Apartment Rental Business – There were three apartments on the top floor of Stearns Motors. Lou Stearns lived in the largest one with his girlfriend Florence Brown. Lou and Florence had a turbulent relationship. At one time they were going to be married in Minneapolis, but by the time they arrived on the train, they had a terrible disagreement and fight. Both returned to Minot, but on separate trains. There is a story that whenever Florence would go Minneapolis, Lou would load a car on a flatbed rail car and send it to her destination so she would have something to drive. 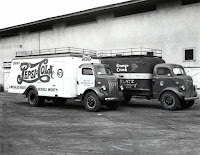 Posted by minotmemories at 3:53 AM