Twist Inn – an article in the Newspaper on August 7, 1969 stated that Arnold Merkel and his wife Beverly had taken over owner ship and management of the Twist Inn located at 800 North Broadway. They purchased the business from Norel Carlson. The new name will be Merk’s Twist In. the new hours were to be 11 am to 11 pm seven days a week. Two more waitresses were added to the staff. Merk was previously employed as a sales representative for KMOT-TV. Grand opening Spcials included 5 hamburgers for $1.00 --- Malts and Sundaes – 2 for 1 and an eight piece bucket of chicken with jo-jo potatoes for $1.95 --- a 16 piece bucket was only $3.95. ... I have no pictures of the Twist Inn... Here is a list of Restaurants in 1954 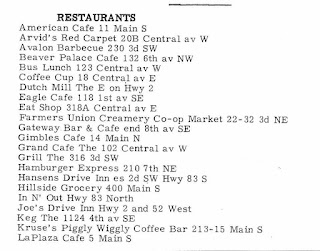 Posted by minotmemories at 4:00 AM