Nelson Motors was located at 614 Second St NW. The business began as “Ted and Markies” repair shop. In 1940 they entered in the new car field. The owners were Mark Nelson and Ted Hugh. The business was known as Hugh-Nelson Motors. In 1960 Nelson and sons bought out the interest of Ted Hugh. The Rambler was the vehicle line the carried. Eventually the name was changed to Nelson Motors and the car line became American Motors. One of the popular vehicles in the late 60’s was the Javelin and the AMC. Both were sports cars and were meant to rival the Mustangs and Camaros. The AMC was one of the cars I always wanted to own, but so far never have. 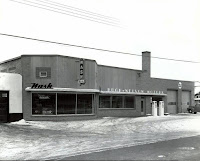 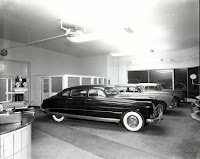 New Hudsons on Showroom Floor
Posted by minotmemories at 5:03 AM