The original Minot Public Library began in 1908 in two rooms rented in the Optic Block. In 1908 the city approved its first mill levy for library purposes. In 1910 with $2000 in its treasury, the library obtained a grant from Andrew Carnegie for a new building. The Library was built at the corner of what is now Second Avenue and First Street Southeast. The library moved into its new home in 1911 and remained there for 55 years, when it moved into its current location. When the Library was dedicated in February of 1912, it had 1490 books and claimed to have 1350 borrowers. The original library building is now the Carnegie Center. 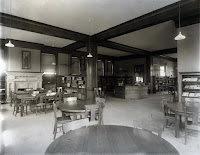