On September 16, 1967 plans were disclosed about a new shopping center that was a “certainty” to be developed at the base on north hill on Broadway I  Minot – Crestview Development claimed the Center was “an absolute certainty. It’s just the details. There’s no way in the world it can be stopped”. The Center was to be the largest between Minneapolis and Portland and was to include two major department stores, a major drug store, 750 seat theater, and a 50 X 300 foot convention center. For what ever reason it was never built. The location is now the home to the Hampton Inn Hotel on North Broadway. 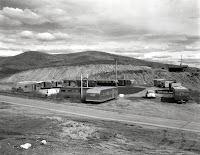 
Posted by minotmemories at 4:46 AM