Downtown Minot in 1950 -– Entertainment – If one wanted to watch a movie  there was the Orpheum Theater, The Strand and The State. In 1952 the Empire opened. Admission was a quarter and a bag of popcorn was a dime.
For more adult entertainment and refreshments there were a number of bars in Downtown Minot. There was the Brown Derby, The Buffalo Tap, Brady’s, The Covered Wagon, North Main Tavern, The Terrace, The Grand Tavern, Lee’s, The 13 Club and Vaughn’s . Downtown Minot provided all ages with some sort of entertainment in 1950. 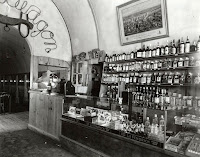 Posted by minotmemories at 5:09 AM