The Parker House -- The Parker House was Minot’s first hotel. It was established in 1886 by Mr. and Mrs. W.H. Parker, parents of Clarence Parker. The hotel was in downtown Minot on 2nd Avenue. It was temporary home to many travelers and many of the buffalo bone wagon drivers. Buffalo bones were the cash crop for many early settlers in and around Minot. The bones were hauled in by the horse drawn wagon full and piled next to the railroad tracks. When loaded on the trains the bones were shipped to the east and I believe ground for fertilizer and other uses. Depending on the market in the east, buffalo bones were bringing $4.00 to $12.00 a ton. At one time there were so many buffalo bones stacked by the tracks that the railroad laid down a spur line just to load all the bones 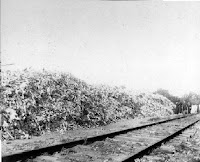 Spur Line next to Buffalo Bones

early picture of the Parker House
Posted by minotmemories at 5:08 AM