The first building to serve as City Hall for Minot was the home to the Police Dept in the basement, the Fire Dept. on the main floor and dormitory above, the jail, magistrate’s office and the City Manager office and staff also on the main floor. It was built in 1905 and was located mid block between Main St. and 1st St SW. (or next to the Alley behind the Montgomery Ward building – across the street from the 1st Avenue Building). In the early 1900’s, this was quite literally the center of Minot. DA Dinnie was awarded the bid for construction for the price of $11,171.00. The new building  to be the best facility of its kind in the country for cities the size of Minot. However the Minot Aldermen were so disenchanted with the finished result they refused to occupy it as they claimed it had not been built to specifications. About 6 months later they resolved the conflict and moved in. 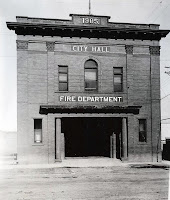 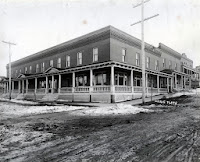 Posted by minotmemories at 5:25 AM